More Than A Woman

Many people assume I am a feminist - I agree, I am. Only that my definition of feminism is about promoting the rights of women and not necessarily the wrongs of men.

Some 'Muslim Feminists' would hate me as I actually agree with Shariah Law and don't try my best in ripping it apart.

I chose the name Bint-eh Adam though I love the name I was given by my dad's friend all those moons ago.

" Bint-eh Adam or Daughter of Adam implies my true identity: a child of the first human being. The importance of Bint or the word Daughter denoting the female gender signifies the elevation of the status of women by God Almighty. A whole chapter has been named "The Women" in the Holy text (Quran) and for me it is about projecting this in contemporary society where often the female gender is suppressed. "
I attempt to share a little bit about some women I have been fortunate enough to have known .. women who have broadened my own understanding of womanhood:

I know a woman who is a Carer for her sick parent.

I know a woman whose husband left her after she gave birth to a girl for the *th time.

I know a woman who still weeps for her son who was shot in the early hours of one morn.

I remember hugging a woman in her 30s with

secondary breast cancer who gave me the most beautiful smile ever, dying a couple of months later and leaving behind 3 children.

I remember catching the plane to Pakistan and sitting next to a woman and her 9 year old girl who lived alone since her husband left her for another woman. The lovely little child growing with just one parent - will her mother ever tell her that her dad spent a little while with her simply because she was brought up in a conservative part of Pakistan and her parents had thought it in her best interests to wed her to this man?

I met a woman who was raped by her father.

I met a woman who lost 4 members of her family through death in a span of some years and is now in a state of depression.

I know a woman whose son takes illegal drugs.

I know a woman who has dis-owned her daughter who ran away from home.

I was introduced to a woman in her late 90s by my nan, who was on her death-bed and touched my head saying she was very happy I wore a scarf in the West. Giving me prayers .. so many years later .. she has now moved on out of this realm but her face is clear in my mind.

I was introduced to a woman who is from a generation of masseurs.. each woman having taught the next, knowing every bone in the body, yet not being able to write her name.

I remember a woman who used to sew clothes for the children in her street a few decades ago.

I know of a woman who works as the bread-winner to provide for her family because her husband is sick and unable to work.

I was taught by a woman who witnessed injustices being carried out on women in an African country (many decades ago).

I know of a woman who is nearing her 80s and has no children; yet her gentle touch reminds me of my mothers' warmth.

I spoke to a woman who left her home in Congo when fighting broke out and is now a refugee.

I love a woman who doesn't know how to use a clock - but uses the position of the sun, the stars and the moon to tell the time. 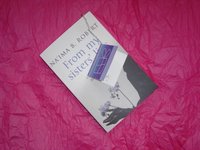 I wish for a woman who told me guilt is not a healthy emotion.

I pray for the woman who told me never to abandon my prayer.

I know a woman whose wise words and gentle humour never fail to lift my spirits despite the trials that she faces in her life.

Oh & do tell what you thought of the book. Looks interesting, i might buy it :)

I believe each of us should sit and make a list of women (and men) whom we have met in our lives... and then besides each individual we should write what we have learnt from that person.

Don't forget we enter one anothers' lives for a reason:

A negative -
or
A positive +
reason.

Everyone whom we have had the opportunity to 'interact' with [in whatever means] has had an impact upon us. We may not realise it - but they have. Similarly, we too have an 'impact' upon others.. it may be positive or it may not be. But one should attemp that it is.

"I know a woman whose wise words and gentle humour never fail to lift my spirits despite the trials that she faces in her life."

Ameen - I would also like to be introduced to her ;)

One could only hope that the descriptions we use to praise others are bonded into prayers so that individual becomes a manifestation of the description.

Thanks for poppin by at Camel-Land my love :-)

Yes, it's a lovely book and I would really recommend it! If mine wasn't a gift - I'd give you it!

hey - so why "dismantled"?? Enlighten me as although I'm old - I'm not that bright.. niether wise ;o)

I recently got a book voucher as a gift so no problem on what book im going to use it on :) [yes, im a geek]

Dismantled? Well, i started the [should take some responsibility for it, MY] blog to sort of write down my feelings and such when i was on an 'all-time-low' like a form of 'dismantling' myself [i dont know what i just said there btw]. However, Ive decided to make my blog kind of 'cheerful' as i began to share it with others but no avail [its still a miserable dump].

Neither bright nor wise? You lie :p

A fine geek - yes use that voucher wisely ;) Actually.. the other day I took a look at my bookshelf and realised that I had brought most of them during this period of ill-health! I was quite shocked! So I suggest that you take stock of your books quick whilst you're still young!

Writing is therapeutic..
Many people have suggested that one should write their thoughts as it helps one not only to explore and express themselves .. but also to organise their thinking - - - >> which ultimately affects their behaviour.

I think its a nice idea to have a journal. I have a hard-copy one too.. where I write more deeper, personal thoughts. But then there will always be certain thoughts that only God and you will know about - and there is no rule which says one should write everything they think :)

If it helps you feel better - then use creative writing to assist you.

You may want to make it cheerful by adding colour? .. I thought someone had switched the lights off when I went to your blog ;)

Yes, i have plans to hit Waterstones this week inshallah [well when im not so busy with college work & Jan modules]. My bookcase, although small is still growing, im happy to say [my most prized possesion in my room *grin*].

You mentioned "..period of ill-health"? Please do tell me to shut up, im sometimes too nosey but alas, i pray your're well :)

Yes, it did kind of 'help' me but then i didnt want to dwell on 'unhappy' things anymore, hence writing about more 'crap' on my blog other than 'crap' that was making me frustrated and upset. I have a book too, where i carry it around with me all the time and sometimes, i just get it out to either write in it or just doodle without realizing. It contains memories, pictures, poems/proses and weird drawings [i cant draw to save my life but nevertheless]

lol thats good to hear. Something to look forward to, atleast by Allah's leave.

Great! I think you'd be putting that voucher to good use with that book - I haven't as yet read it but a couple of friends who have read it - really really enjoyed it. The style of the book is very different and friendly too. So that's a bonus :-D

Ooh - my health - I suggest you read the first entry.. and follow through the links.. but in a nutshell I have been on long-term sick-leave from work since February 2004. I have had chronic pain in my hands.. akin to RSI but it was a Tennis Elbow which then became quite widespread :-/ We tested for naughty nerves and Arthritis but all seems to be well in there!

But I guess it was life calling me to a place quite different to where I thought I needed to go :-)

Your Scrap-Book reminds me of an artist I knew.. He always carries a book around with him and collects things -

As I said earlier you are an artist waiting to be discovered :-) The great thing is though - you have discovered yourself (or at least your artistic streak) - now all that's needed is for others to see that in you! I hope you are stydying something 'creative' at college?

And girlfriend Black is so NOT neutral ;o) !!

Ah damn. Inshallah, i pray your're well and wikked [in the good way of course!] Its inspiring [its that weird of me to say?] that you seem to have your humour intact & you are quite cheerful albeit to blaming life & the such :)

Creative? Ah. I study science at college [chem, bio & phys]. A subject which i enjoy [most of the time] & think im pretty good at [hmm, lets hope this years results say the same thing or atleast are similar to last year's].

My 'passion' & dream was to go into the forensics field which recently changed to medicine. I know, medicine: typical asian thing but my decision wasn't influenced by my family. Actually, one time, i was skeptical of which field to go into for uni & my dad put it rather simply: "Do you want to help dead people or people who are actually alive?"

RE: being 'discovered'. You see, poems/proses i sometimes write are 'reserved' & somewhat 'exclusive' to only few people.

lol okay, maybe not neutral. Black & red are my fave colours. Wikked contrast [although i dont wear them together]

A sense of humour? Me? Well you know how it is..

Life will throw at you what has been destined for you - so why get so grumpy about it all?! Giggle-therapy is actually quite beneficial as a measure of pain control.

Furthermore, one can only blame life for a period of time - after that the Reality kicks in - and that is, that we all have to experience unexpected and surprising events in our life to get a little more closer to our ultimate realisations as humans here on earth. Essentially, it is only after our life-turning events have surpassed that we can draw conclusions as to what we have learnt or what we did not know beforehand.

A doc?
Alhamdulila - all the best dear! Be a doc with a difference ;-)
Your daddys' words are quite strong there - I'm glad you're a keen teen .. I can assure you the hardwork will show fruit one day!

And yes you are right to reserve exclusivity regards your prose.. keep them special - for the special. Neat, I like the sound of that :o)

Black and Red - but I didn't see much red in your place? Perhaps I need to take a candle-stick with me next time I pop round :-)

And hey - what's the big deal leaving me comments after midnight - you owl! Don't you young kiddies go to sleep nowadays???