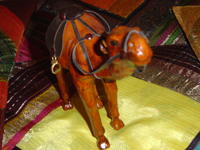 AsalamAlaikum to all - Greetings & Salutations from my world :-)

Well - I always get enquiries from people about my camel herd, so seems its Ramadhan, here is one gem :o)

And here is an update from my place:

GOING OUT - I'm going out tomorrow InshaAllah (God-Willing) after 7 days..

For some reason, I'm really not looking forward to it. As I said before I don't go out much these days (no longer than an hour) so I'm becoming a bit of a hermit. Well the cold weather doesn't add as an incentive either.

In fact I got told off a few days ago from Sergeant Mum - she told me I looked like a tramp because I hadn't got out of my pyjamas for a couple of days! :-(

But I'm sure one doesn't completely lose thier social skills by not going out for a few days? Surely not! Those who retreat are not dime-bars! They have outstanding skills in social interaction! Hurrah for hermits! 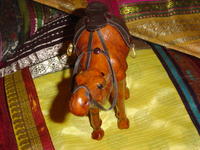 WORK - The manager and personnel staff dropped by last week for their second visit as I'm on 'long-term absence'. They said they'll ask all the staff to write letters to me as I cannot access College email (college system has terrible passwords which keep expiring every few months). Besides I love letters! Tranquil Mail I think I'll call it - Yes!

SICKY - have another 4 weeks sicknote..

HOSPITAL - About a fortnight to go for my next apointment with the Consultant. I finally get some results! I rest convinced that I don't have either of the two suspects: Carpal Tunnel or Rheumatoid Arthritis. I don't know why.. the fact that I am still nowhere closer to finding a set "pattern" for the pain gives me support that it's not them two! Maybe it was just a 'passing phase'?

PAIN - Alot lot better I cannot even begin to Thank God Almighty for His Bounty. However, as strange as it seems - the migraines are back with a vengence :-/ as too are my crazy bowel movements. I'm becoming disgustingly unhealthy as each month passes. 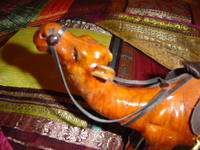 CAMELS - those humpy fellas went to Jerusalem last month for 27th Rajab. From there they decided to head for Baghdad and surrounding places as they wanted to meet old relatives. Some relatives which are very elderly. They are hoping to arrive at Mecca for the start of Ramadhan this week. After that they are hoping to head for Medina for a 10-day retreat as Ramadhans' last third passes. I have a feeling it will be a long time before they come back to England. I'm sure they will want to stay for Shawwal and then its only a matter of weeks before Hajj preps start. Thus it looks as if I shall be spending this winter without them.

In any case Big Camel is still here - keeping an eye on things for me. There have been a lot of problems with the Tranquilart server and he is working with the guy from cyberworld to sort things out.

THINGS TO DO - I have lots of outstanding things to do, its becoming more of a drag as each day passes. I really need to do these before the year is out:

* Renew my passport - got the application form a few months ago, but have not had a chance to get my photographs taken!

* The Book Review for Deenport - it will get done I tell myself.

*Duster my room - I've looked up at the walls not long ago: my my dust! I really need to either beg my sister to duster it or risk myself doing it. It's absolutely crazy - so many parts of my room need to be 'sorted out'. I have all the paperwork from last academic year which is in boxes, my bookshelves need tending to. It's a mess.

*Visit new babies and friends - one poor babe has been waiting for me for 6 months now to come and see her!

Comments:
Thought I'd update here rather than start a new post -

Then I kinda got into the flow again.. and decided to go out to city with my sister a day or so later.

So there you are, I'm not a complete hermit :-) Part-timer!

The pain in my right hand, elbow and shoulder (may aswell say arm)is back sadly. Started yesterday evening again as I decided on dusting a little bit of what I've been inhaling these past many months. So, looks like I'm gonna have to slow down a little again.

And I've found texting is a painful buggery-boo of a task. In the last 24 hours it has become absolutely terrible to text using the Mobile. I feel irritated; fingers feel stiff and it's just so painstakingly full of effort! AARRRGGHH! I could yell!

Thus, I will be texting back to people in the mornings from beneath my duvet as that is most conveneinet at the moment. I think the reason for it is because of the position of my arms, and also the hands are pretty-much warmer (?) don't know...

But in any case folk will have to excuse the 'delay'. I did get a text or two today whereupon I decided to call the person back rather than text reply.. So we'll have to see what happens.

That's that - I now have a box full of the books I took off the shelves.. and hope that within the next 3 months I have cleaned almost every part of this room of mine!

And Oh - both the .com and .co.uk sites of mine are offline!!! What on earth is happening to the server-dudes!

May Allah swt make things easier for you sis *Hugz* Ameen, Ameen, Thumm Ameen
PS Are you a mureed?

Thank you for the juppy yaar & yes, ameen ameen indeed.

Mureed?
Of what? I am a mureed of a couple of strange and weird things :(

But, no disrespect to the term.. To answer your Question:
I'm actually not :-/

Why do you ask? To be honest, if I were, I would find it awkward to 'answer' so publicly. Don't get me wrong - I've always believed that the Mureed / Shaikh relationship is a deeply personal one: as the Shaykh is the Physician who is helping the sick man's heart.

I wasn't brought up in an environ observant of such relationships.. hope you didn't find the answer offensive ;-)

InshaAllah for now I remain a beggar standing outside the world of those who enjoy their heart's being healed by their respective Physicians - I may enter, I may not - My Lord knoweth best :o)

Gosh managed to clean another little piece of my room.. the mail! Two weeks of letters had piled; after opening them I'd been unable to slot them in their appropriate places ie bin or basket! Plus had lots of day-trippers, receipts etc. I guess the only downside of being a Recycle-freak is that you have to pile 'em up that long!

I can't bear to see certain parts of this room, absolutely making me cringe - even after my little sisters' exhaustive efforts at hovering my room.. so much sorting out to do!