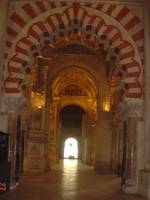 This is the only Mosque that remains in Spain from the Moorish era. It has an area of 22.400 square kilometres. The architecture of the Umayyad dynasty of Spain is characterized by the appropriation of an existing local Late Antique architectural tradition that was reinterpreted for Islamic patrons. The Great Mosque of Cordoba exemplifies this process, with its ashlar construction, hypostyle hall of spolia columns and capitals supporting arcades of horseshoe arches (an element adapted from Visigothic architecture). Its ornamental program of mosaics and carved relief sculpture evoke the decoration of the Umayyad monuments of Syria.