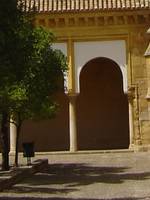 On June 29 1236, the city of Cordoba was reconquested and the Mosque was declared as a Christian monument. Work started to convert it into a cathedral. It is said that when the king visited Cordoba (after his marriage with Isabel of Portugal in Seville), he saw the mosque and told the Archbishop: "I did not know that it was like that. If I had known, I would not have allowed you to destroy it, because what you have done could be done in other parts. You have destroyed what was unique in the world."